Recently, I came across an article in the Global Post titled “India: The orphans of HIV” by Hanna Ingber Win, and what made this piece of writing particularly memorable was its focus on the growing number of HIV-positive children that are living beyond their life expectancy.

Win rightfully points out that “[a]s children in India live longer with HIV than was ever expected, Indian society must grapple with new challenges as these orphans transition into adulthood.”

When I shared this article with my fellow staff members and volunteers of Tara Children’s Project, it elicited a unanimous response – we always expected our children to live a long life, much into their adulthood. This article reinforced/confirmed our collective belief and approach towards working with the children, giving us even greater hope to continue with our work.

As a large number of HIV-positive children in the global community are growing up and requiring their own unique services, and with the number of children 15 years and younger orphaned by AIDS in India estimated to be anywhere between 2 to 4 million this year (UN/USAID), we have an enormous social challenge ahead of us. 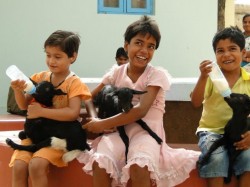 “Seeing how much healthier and happier the children have become in just over a year under our care, we expect them to live a very long and fulfilling life. HIV will be just another aspect of this life, not something that will define them.” Dr. Sanjay / Ven. Thubten Labdron

The Tara Children’s Project, a project of Root Institute for Wisdom Culture, is committed to providing a safe and loving environment where special children learn universal ethics and values based on the Six Basic Guidelines (distilled from the 16 Guidelines): kindness, rejoicing, patience, forgiveness and apology, and courage. In addition, they have access to education, holistic health care and psycho-social support. In short, The Tara Children’s Project is their home for life.

Prior to admission, most of the children were neglected by family members and relatives. On top of losing their parents to the disease, many of these children face great discrimination. They are the silent victims of the epidemic. Naushad, who dreams of flying a plane one day, was deserted by his father following his mother’s death from HIV/AIDS. Even though we cannot replace everything they’ve lost, we can give them a chance at a normal life, in a “family” of kind, supportive caregivers, teachers and role models.

As the current volunteer coordinator of the Tara Children’s Project and as someone that has seen the immeasurable potential in our children during my 10 months at Root Institute, I started to daydream (a habit nourished by the scorching 45°C  [113°F] Bodhgaya heat) that our children were no longer just children, but courageous, confident, compassionate young adult activists at the forefront of this social movement, demanding equal rights and services, and becoming an inspiration for all other marginalized groups.

A strong sense of values, ethics and civic engagement developed through the universal education framework at home, coupled with a broad knowledge and transferrable skills developed through a strong academic preparation will ensure our children success and happiness in any field they choose. In fact, with our oldest child, Arpita, entering adolescence, we are discussing plans to send her to one of the better private schools in the area.

One of the primary goals of the Tara Children’s Project is to integrate our children into mainstream society by reducing the stigma and discrimination associated with AIDS. To facilitate the creation of a more informed and accepting society for our children ,we offer village theatrical performances. These are extremely well attended since there is so little family entertainment in the villages! We also facilitate workshops with students and teachers in schools, and conferences for local medical practitioners organized through Shakyamuni Buddha Community Health Care Centre, Root Institute’s charitable health program.