TAKING CARE OF OTHERS: ANIMAL LIBERATION 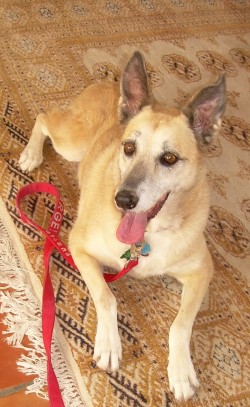 Formerly “Sara,” Sera Je the dog was rescued from euthanasia and eventually given a special home with Ven. Losang Kalden, director of Manjushri Wisdom Center in Tuscon, Arizona, USA.

“Sera has quite a story,” Ven. Losang Kalden shares, “Apparently, she had been very abused, found herself somehow on the streets of Nogales, Arizona, was very ill, very thin, with a badly broken back leg. She was eventually taken to a vet after having been rescued from death. The vet said that the most compassionate thing that could be done for her was to amputate the leg. He said it had been broken for a very long time and that she was in intense pain. When he amputated it, he discovered that someone had tried to fix the leg because he had found wire inside.

“She was absolutely terrified when I got her. She was shaking badly; her eyes were round and bulging. She weighed 45 lbs [20.5 kg] when taken off the streets. Now she is up to 62.9 lbs [28.5 kg] and looks really good. People fall in love with her at first sight. She is still very standoffish around men, so I think it may have been males who so badly mistreated her. Now she can socialize with dogs, is very happy and is doing amazingly well in general.”

Sera Je is continually immersed in the Dharma, often choosing to sleep in Ven. Losang Kalden’s room filled with holy objects as opposed to several other options inside and outside of the house. A recording of Lama Zopa Rinpohce’s chanting of om mani padme hum plays constantly for Sera Je to hear. Because Sera Je’s new home is also a Dharma center, she often is present for Dharma classes and pujas, and hears Ven. Losang Kalden do several hours of daily prayer.

“Whatever it takes to keep her mind happy and her body taken care of, she gets to the limit of my ability to give. She is a very precious being; she seems to share that quality to the others who meet her. I am fortunate for her to have come into my life.”

You can meet some other amazing rescued dogs in “MAITRI Animal Care Program” on page 30 of the January-March 2011 issue.