The Rise of the Geshe-ma 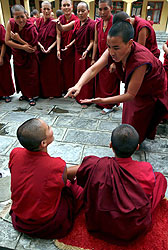 His Holiness has made the call: He wishes for there to be a Geshe-ma degree for Tibetan Buddhist nuns. This stunning appreciation of the benefits to be had by offering advanced educational opportunities to nuns has only recently found a few outlets for its reception. The Institute of Buddhist Dialectics in Dharamsala, a monastic institute started by His Holiness, now offers a Geshe degree to its students, among whom are several nuns, including a Western Tibetan Buddhist nun named Ven. Kelsang Wangmo. Ven. Wangmo is in her fifteenth year of study at the Institute; if she passes her exams, she may become the first to obtain a Geshe-ma degree. Fast on her heels are a number of Tibetan and Himalayan nuns at nunneries in Nepal and India.

We happened to arrive on the day of the month of the speech competition, so instead of the regular classes, all the nuns were in the main Assembly Hall. Students from different classes with pre-prepared speeches stood at the podium in front of the throne of His Holiness the Dalai Lama, whose life-like photo gave the impression of him actually being present, looking down on the proceedings. To the right was Khenrinpoche Geshe Lhundrup, seated on a low throne, listening and encouraging the nuns as they read their speeches in Tibetan or English, on topics as varied as friendship and the environment.

I thought because Geshe Lhundrup was present it must be a very special occasion; after all, not only is he Abbot of the nunnery, but also of one of the largest, busiest monasteries in Nepal, Kopan Monastery, just up the hill. I was to be further surprised as he returned in the afternoon, as he does every afternoon, I learned, to teach Buddhist philosophy to the nuns.

After the speech competition, the nuns dispersed from the Assembly Hall to their rooms, splashes of maroon spreading though the nunnery. From the outside, the nunnery looks large and impressive, but once inside it is easy to understand that the premises were originally designed for only a few hundred nuns, and are now filled to the brim and overflowing. The rooms for the juniors, designed to hold three nuns, now have mattresses on the floor and house five. When all the nuns are in residence, there is not enough room for everyone in the Assembly Hall nor the Dining Hall.

Most of the current 380 nuns come from the mountain regions of Nepal and Tibet, many from the regions of Solu Khumbu and Tsum. We were surprised by the nuns who came all the way to Kopan from Ladhak in India, given the choice of monasteries in Ladhak itself and all over India. It seems the reputation of the study program offered at Kopan has spread. Another huge draw has to be the fact that once a nun is admitted into Kopan, everything – food, lodging, and education – is free, for the most part paid by generous sponsors. …