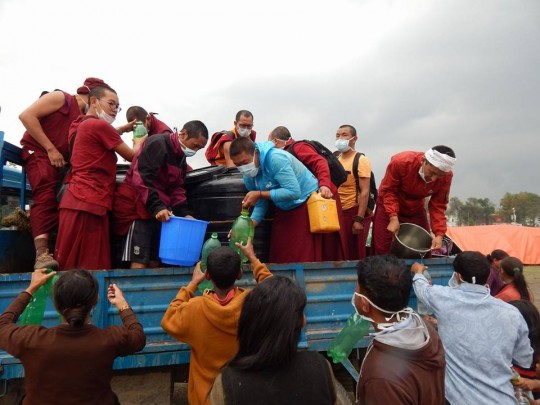 The Nepal earthquake of April 2015 profoundly affected the country and the people who live there. One of the bright spots in the struggle for survival and recovery in Nepal has been the work of the monks and nuns of Kopan Monastery and Nunnery who have offered direct help and assistance to thousands of people. Kopan’s Ani Fran shared with Mandala a summary of some of their activities.

Kopan monks and nuns come from all areas of Nepal and so, naturally, after the first shock of experiencing the April 2015 earthquake, their concern turned toward their families and villages, in addition to all the other people hit by this disaster. Just two days after the first tremor, a large group of Kopan monks set out to help with cleaning up damaged houses and public places in Kathmandu.

It soon became clear to everybody that much more immediate help – food, water, blankets, etc. – was needed to take care of the people affected by the earthquake. A committee called Kopan Helping Hands was formed to coordinate the relief efforts of the monastery. Geshe Thubten Jinpa, one of the main instigators, managed the relief efforts from a chair and table in the Kopan courtyard. In the days immediately after the earthquake, there was no school and no formal pujas, and as everybody was still too scared to stay in the buildings for any length of time, Kopan Helping Hands received a significant boost in support.

Hired trucks loaded with big water tanks and bags of food went out to different areas in Kathmandu and surrounding villages to give immediate help. Another group prepared hot food to give to the people stranded in the various tent cities. Some monks went to various areas of Kathmandu to help with cleaning up. And others registered at the local hospitals as volunteers. 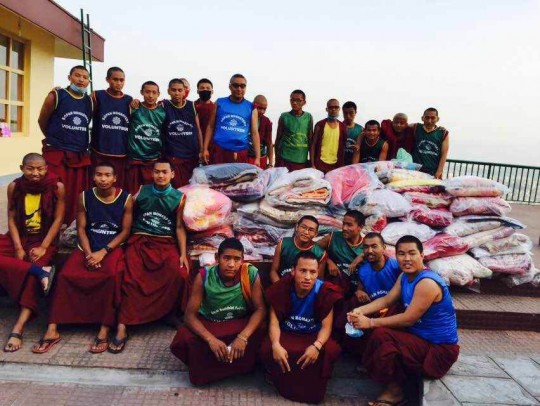 Monks prepared to go out and deliver emergency aid, Nepal, 2015

Within the first two weeks after the initial earthquake, it became clear that the main damage had occurred in the mountainous remote areas, where houses collapsed and whole villages disappeared underneath landslides. Monks bought and packed rice, dahl, bottled water, and clothes into big sacks to take to the these remote villages, where no other aid had arrived. Groups in trucks ventured out to nearby areas that were badly hit, trying to supply what was needed most urgently. Tarpaulins, tents, sleeping bags, mattresses were added to a list that included blankets, medicine, and daily hygienic items. Everybody helped to pack, fold tarpaulins, prepare food packages, load trucks, and even pull trucks out of the mud, which became a normal chore. 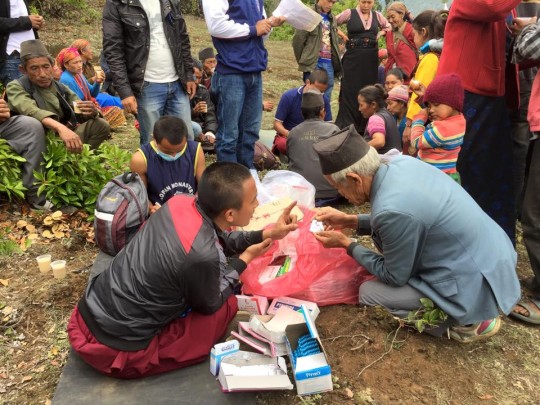 Geshe Thubten Sherab, the assistant headmaster, took on the task of reaching out to people through the Kopan School Facebook page, inspiring people to help in many ways. People around the world sent donations collected in the most amazing ways – such as dinner parties, abseiling (rappelling) events, knitting contests and opera performances – from their friends and local communities. One company in Melbourne offered to send to Kopan a solar light for every solar light customers bought in its shop.

Kopan Helping Hands received thousands of dollars from complete strangers who had never heard of Kopan before. One person came to the reception and put US$3,000 dollars on the table just to help out. In short, everyone’s generosity was amazing. 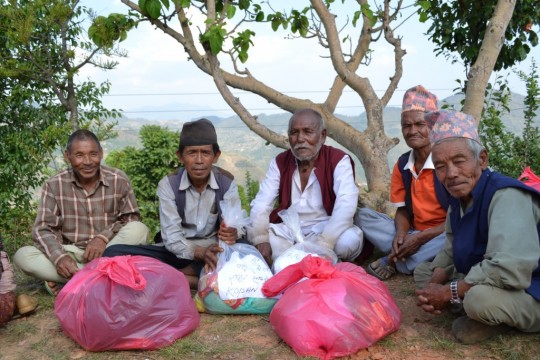 At the same time, a steady stream of local people started to come through the Kopan gates looking for help. And because of everyone’s support, they all received some assistance – from food to roofing iron sheets to bamboo for rebuilding.

Five month after the earthquake, the emphasis of Kopan Helping Hands had moved on from giving direct help for immediate relief to helping people rebuild their homes. In cooperation with the village leaders, teams of monks go to remote areas looking for individuals and families who have been left behind, i.e., those who have special needs – such as the elderly and sick – and those in very remote areas where normal transport cannot reach. Several very generous sponsors have come forward to fund the rebuilding of houses and simple shelters for 155 families and single old people, who are unable to build themselves or who have no means to buy building materials. 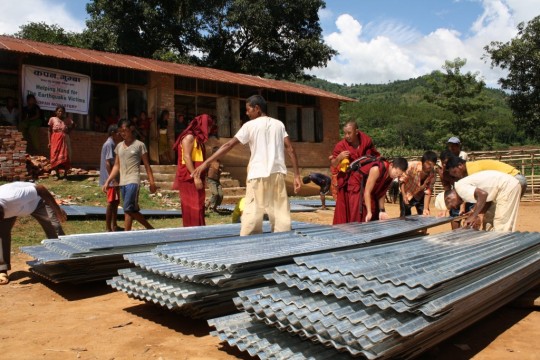 The building of these houses has already started. The World Food Fund has been providing assistance by transporting building materials and urgent food supplies to remote areas by helicopter, making sure that vital supplies of corrugated iron, heavy tents, nails, and tools are delivered to the villages in Dolakhel, Rowaling, Sindupalchok, and Ghorka. The houses will be built using local stone and corrugated iron sheets for the roofs. Pipes for repairing the water supply, ply board for lining the walls and similar items all have been delivered in large quantities.

In another project, Kopan Helping Hands collected information about the damaged or destroyed small monasteries in the mountainous areas to which the government is not planning on giving financial support. Kopan Helping Hands gave several thousand dollars and other material support to each of these small monasteries. Again, teams of monks are going out to these hard-to-reach places and making contact with those that need help. Truck deliveries have started again and fund raising is continuing.

Although the world has already started to forget the earthquake in Nepal, the need of the people is still here, the suffering and loss still hurts, and help and succor for all those affected by the earthquake must not stop.