Applied Buddhism and the Israeli-Palestinian Conflict

Presented at the conference “Engaged Buddhism in the 21st Century” for the United Nations Day of Vesak 2008, Hanoi Vietnam by Bar Zecharya 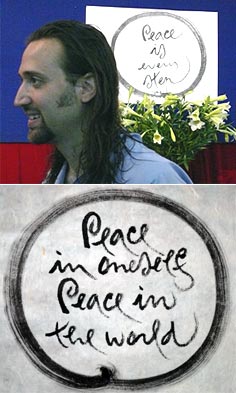 It’s humbling to stand here in the presence of so many whose compassion and dedication have touched the hearts and lives of so many people. In comparison to your kindness, your practice and the fruits of your efforts, I am a very small fish indeed. But it is so much better to be a small fish swimming in the stream of compassion than a small fish frying in the pan of anger.

I speak to you as an Israeli, American, adopted Roman, Jew, Buddhist, poet. As a musician, student of politics and of religion, teacher, friend, partner, ex-husband, enthusiastic motorcyclist; as a former infantry soldier who to this day still feels his automatic assault rifle like some amputees feel their missing limb, pressed against my shoulder and smelling of sweat and grease. I speak to you as a brother, a son (thank you, Mom and Dad) and someday, perhaps, a father. I would like to offer you the following reflections on applied Buddhism in the context of the Middle East.

You may think that in the Holy Land there is a conflict between Israelis and Palestinians. This is not the truth. There is great suffering, yes. Fear is all pervasive: there is not just the fear of army incursions, assassinations, terrorist attacks, the call to report to reserve duty and nuclear annihilation, but also the fear of exploitation, fear of economic insecurity, fear of loss, of not producing enough, of not being strong enough. Conflict is rife in every sector of society, from the schools to the government, from the murderous traffic to the family to the army; public and private spheres, religious and secular. There is tremendous violence against women and against children, abuse of power in the workplace, corruption, wholesale neglect and destruction of the natural and human environment.

All of this violence is the result of confusion, misperception and wrong views. The suffering is great, but if we misinterpret that suffering as the result of a conflict between two nations we are ignoring its real roots and will only perpetuate it. Using the Buddhist tool of looking deeply into the emptiness of an independent self, we can see a different reality. We Israelis and Palestinians may not be the same, but we are not different either. We are united in our fear, bound by our anger, intimately connected by our inability to listen with an open heart and identical in holding the mistaken notion that our suffering is the result of a “national conflict”.

This is not to say that there are no machines of war, no suicide attacks, checkpoints or existential threats. But by looking deeply into its reality, we can see that the physical war is a reflection of the one in our hearts, an attempt to control our suffering by projecting it onto a clearly identifiable external enemy. To cover up the deeper reality of our suffering and its causes, to mask it with a narrative involving two independent characters, is to do a great injustice and to render impossible any real transformation.

In my opinion, understanding the deeper dimensions of suffering in the Holy Land is already a form of applied Buddhism. What practical steps can we take to alleviate this suffering?

The first step, as always, is to protect ourselves by cultivating compassion. You may live in Southeast Asia, Europe or anywhere else on this planet that so generously provides for us, and often on the television you will see images of political conflict. If we respond to those images out of judgment, collapsing the infinite web of social, political, institutional, familial and psychological causes and conditions into a simplistic schema involving two sides – one as a victim and the other as an aggressor – we are watering the seeds of judgment in ourselves. Anger and hate need no permit or passport to pass through a checkpoint or concrete wall, and just as easily can they pass through our hearts. If we strengthen the seeds of judgment, anger and hate, their fruits will find their way to all aspects of our lives and will damage the relationships with all those around us. Your partners, your children, your parents and all of your loved ones are precious to you. It would be such a shame if our confusion and ill-being led to even a moment of discord or disharmony in your family and community.

The same television transmission can be embraced with compassion and deep understanding. Think of someone who launches a Qassam rocket into Israel. Being a militant is not their entire truth. No one is only a militant. They may be a militant, son, brother, friend, artist, student and so on, including being a victim of the numerous manifold causes for his belief that killing can solve his suffering or the suffering of his loved ones. No one is only a soldier either. The truth of a soldier, whose confusion and whose actions can be seen as the result of many causes, deep and wide, is just as complex, just as human. His commander and general are both victims. Were they able to see deeper, they would have acted differently.

Please, friends, for your own sake, and your own happiness, take this as a meditation on non-duality and interbeing in order to develop your compassion for those of us who have not yet learned to do so. You will be setting a beautiful example of non-judgment for your children, who in turn will be able to enrich their lives and those of their loved ones with compassion and understanding. In this way, you can turn a rocket attack or a military incursion into love, transforming ignorance into a teaching of the Dharma. I believe that this practice will bring more joy into your own life, and that is reason enough to practice it.

Removing the obstacle of a dualistic view also presents many opportunities for applied Buddhism on a wider scale. Just as fear is found in every sector of our society, opportunities for joy can be found as well. We Middle Easterners would do well to learn to appreciate the many conditions of joy and happiness already present in the here and now. This includes our existing friendships, our children, the spectacular natural beauty that surrounds us and the joy we can find by returning to the miracle of our breath. Some of these conditions are also the countless projects of peace and development taking place thanks to the dedication and generosity of individuals the world over. I believe that, whatever your expertise, be it in social work, health care, agriculture, the environment, arts and culture, sports and so on, you can relieve suffering and slowly water the seeds of joy, but only after having personally deepened the practice of compassion, non-judgment and non-duality. Without this practice, I fear that any effort will unfortunately only contribute to further suffering. Coexistence projects are useful and welcome, but focusing solely on coexistence, in my opinion, risks emphasizing only one aspect of the underlying causes. Compassion, deep-listening and loving speech can be practiced at any level of society and in any language.

If applied B uddhism is the practice of freedom, I would like to offer a short prayer for freedom:

“Freedom from fear, from anger, from confusion; from war, from uncertainty, from environmental pollution; from exploitation, from domestic violence, from traffic fatalities and from poverty. Freedom of expression, in speech and in silence, freedom to live in dignity and in economic sufficiency, freedom to feel the joy of being alive and freedom to love.”

A question was asked: How can engaged Buddhism resolve the conflict in West Asia (the Middle East)?

That’s a difficult one! My first response is that preferring one political solution over another, from our standpoint outside of the Middle East, is to practice attachment to views. However, our practice as Buddhists is to practice non-attachment to views. If we choose one particular political solution, believe that it is the correct view and attempt to enforce it on the rest of the world, we will only be practicing judgment and the inability to listen and will water those seeds in ourselves and in others. What we really need to do to have any positive effect is the exact opposite. We need to practice the ability to listen without judgment so the seeds of love, even though they may be small, will be watered. First of all, we must do this practice in our own hearts and in our own day-to-day lives. Second, we can support projects in Israel and in Palestine at any level of society – the familial, governmental, educational, etc. – that involve listening deeply and using loving speech. Finally, we could bring Israelis and Palestinians – both decision-makers and humble citizens – together to simply listen to each other and transform their own suffering. This is the only effort that will have any positive effect.

Bar Zecharya is a Ph.D. student in Political Science at the University of Rome “La Sapienza”. He holds an M.A. in Comparative Religious Studies and a B.A. in International / Middle East Studies from the Ohio State University. Citizen of Israel and the United States, poet and musician, Bar currently lives in Rome, Italy. He is a practitioner of both the Jewish faith and the Zen Buddhist tradition of Venerable Thich Nhat Hanh.


Become a Friend of FPMT