Tibet, Tibet, I Have to Go to Tibet!

THE ROAD TO KOPAN 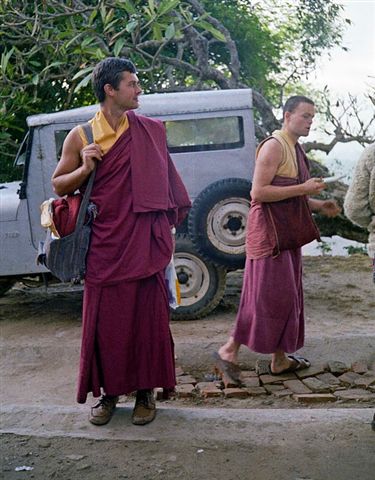 In 1971, Lama Yeshe, Lama Zopa Rinpoche and their first  student, Zina Rachevsky, established Kopan Monastery in Nepal. Zina “pestered” Lama Zopa Rinpoche “like a mosquito” until he agreed to give a one-month lam-rim meditation course to Westerners at the monastery, then called the Mount Everest Center. Twelve Western students attended the first course and for the last forty years, up to two hundred students participate in the annual one-month meditation course. This new section, The Road to Kopan, will feature stories from students who have found their way to, and their home at, Kopan Monastery. To unveil this section, we talked to Harry Sutton, FPMT student of more than thirty-five years, about how he ended up attending his first Kopan course.

The beginning always has to go to the guru Buddha. When one looks for the cause or the condition which brought one to Kopan, I think it always goes back to the initial cause condition, the holy kind guru. That can happen years before someone even hears about Kopan, thinks about Kopan or sees Kopan.

Because of not being intelligent, and quite lazy, high school ended a couple of years early, so I took that time to work and travel all around North America and Europe. Through hitchhiking, I got to meet people, to find out what was going on in their lives. Many times there was not a destination, just going, getting into cars, trucks and people’s lives. It didn’t matter which side of the road to stand on, if I was going north, south, west or east. And when the ride was finished, after listening to their life stories, when the door was closed, I thought: “That’s one life I don’t have to go through.” I lived it through them, for that five-minute, five-hour or two-day ride. Besides, the result was always the same: their lives had discontent, dissatisfaction. After trying everything out in life that the world had to offer for experiencing happiness, I found myself alone and praying into space. I didn’t believe in god but knew there was something greater than me in the universe. And I prayed. And I prayed. I said, usually with tears in my eyes: “May I meet the perfect teachings and the perfect teacher to help my life and others.” I said that every night. After three months of doing this I felt a very strong feeling in my heart, it had a pull to it. And with that pull in my heart was the mantra: “Tibet, Tibet, I have to go to Tibet. Tibet, Tibet, I have to go to Tibet. Tibet, Tibet, I have to go to Tibet.” …