A letter from Lama Zopa Rinpoche 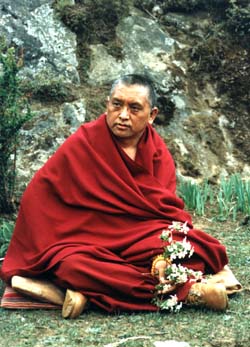 I offer my greetings for this inspiring nuns’ conference, which is helping to bring enlightenment and peace not only to this world but to all sentient beings…
The very essential practice of the teachings of the kind, compassionate Buddha is the practicing purely the pratimoksha vows. This helps one to keep the bodhisattva vows purely, based on cherishing others and living for others. This means one is able to keep the tantric vows more easily. As it’s explained in the teachings, the container is the pratimoksha vows, the water is the bodhisattva vows, the reflection is the tantric vows. This shows how the later one depends on the previous one.

To do this essential practice one needs to understand the pratimoksha vows. But just understanding them is not enough. One must practice mindfulness to cherish and guard the vows in daily life as one would the wish-fulfilling jewel. And if one breaks them, one must apply the antidotes, the remedies, as soon as possible in case some degeneration occurs; one needs to purify with confession so the mental continuum doesn’t become heavily obscured and so there is space and freedom for the path to enlightenment to manifest within us.

Some nunneries have rules like the military. It is said in the Bodhicaryavatara, however, “What is the use of so many rules… except for guiding the mind.” One thing is to look after one’s mind, but the other thing about the vinaya — in order to cause faith in the Triple Gem to develop in others minds — is to not lose one’s vows. There is the possibility of causing great harm to others’ minds. But there is also no question about the incredible benefit sangha can offer to people in the world and to all sentient beings.

Dharma education is very important, but this alone won’t give satisfactionin life. You know this very well. Strong practice is needed. One must meditate on impermanence, death and the lower realm sufferings for months and years and years. Of course, there are emptiness and bodhicitta as well, but I think the meditations on death and the lower realms are the crucial ones, the ones that help the quick realization of emptiness and bodhicitta, that prevent obstacles and purify existing ones.

Living with this fundamental practice… immediately cuts the evil thought of the eight worldly dharmas. One feels immediate peace and satisfaction in the heart and in life.

As mentioned in the Kadampa teachings in the Lam-rim and in Maitreya Buddha’s teachings, the very first thought-transformation practice that opens the door to the holy Dharma is to realize that by following desire one can never find satisfaction. As Lama Tsong Khapa explained, following desire leads to so many problems. If we meditate according to our past and present experiences…we can understand this clearly. Our own life experience becomes a commentary on the result of Dharma practice. It shows the need to keep the mind free from desire — desire being the basis of all problems and obstacles, including anger.

When you are able to give freedom to yourself, when you have split from the evil thought of the eight worldly dharmas through living in the mindfulness of death and the sufferings of the lower realms, and linking all this to karma by relating these meditations to yourself — not like watching a movie or a football game — then being sangha, living in the moral law, will appear as a great protection and support in your life. Being sangha will be incredibly precious and important to you.

With this understanding, this attitude, your life becomes very enjoyable. There’s so much peace, happiness and fulfillment in the heart as you know more and more that you’re benefiting others.

Having received all the important teachings so many times, having studied Tibetan Mahayana Buddhism for so many years — even having extensive intellectual understanding of the Dharma — and having lived in ordination for so many years, why does one still have a feeling that something is missing in the heart! Something feels empty; one doesn’t find satisfaction… : “Me, me, me — don’t find satisfaction!

Okay,…living in vows, knowing the benefits and so on, but what about me! What about my happiness!” All these problems are due to one’s attitude. It is not that one hasn’t studied Dharma extensively or doesn’t have qualified teachers. As far as gurus go, where else should one look if one has His Holiness the Dalai Lama!

The basic thing is the attitude. The sickness, the chronic disease, is the attitude that the main goal of life is not liberation from samsara or enlightenment but is simply gaining happiness of this life. This is what the evil thought of the eight worldly dharmas is looking for. This is the source of most problems and obstacles. Even though you are living with robes, living in ordination and studying so many things, still the heart feels empty and you don t find satisfaction… As soon as you change your attitude into that of seeking liberation from samsara, when liberation becomes your main goal, suddenly you’re free from obstacles, your heart is free from pain and you find enjoyment in your ordination vows. Then you will respect your own vows as well as those of others.

I also think that one particular nun’s capacity isn’t necessarily the capacity of other nuns, such as mixing with people, doing various services, working and teaching Dharma. When you aren’t able to live your daily life with intensive meditation on the lam-rim, when you don’t have realizations of death and renunciation of the path of the lower capable being — not having stabilized these meditations in your daily life — then continually mixing with people can easily affect your mind. You may lose your ordination and become unable to continue this way of practice.

So my conclusion is that sanghas should attempt as much as possible to do retreat, especially in solitary places. Even if one can’t be in retreat all the time, one should attempt it again and again, to recharge and to take care of oneself.

Like Kadampa Geshe Kharak Gomchung said, “Until one’s mind is stabilized with realizations, physically mixing with people and doing service for others is a distraction and becomes an obstacle.” This great meditator advised us to spend more time in meditation and practice. This is my main emphasis and my own point of view too, that for most people the best i s to do retreat, lam-rim retreat. But of course, if one’s mind is strongly stabilized there is no problem doing social work.

Some sanghas who studied for a long time and then went into solitary retreat have told me that what gave them the most satisfaction was retreat; they discovered unbelievable meaning and benefit from doing retreat.

What I’m saying here is this: there are all these studies and things to do in life, but there’s also your heart to take care of; you need to fill up what is empty. This is especially important for Western people — it’s very different for Tibetans. For Western people, the feeling of the heart, satisfaction of the heart, is very important, otherwise they cannot continue living in ordination, it becomes more and more uncomfortable…

With prayers and greetings to everyone at the meeting and with prayers that you all have a most beneficial life.