‘Only Birds and Crickets to Distract the Mind’: First Retreat in the New Gompa at De-Tong Ling 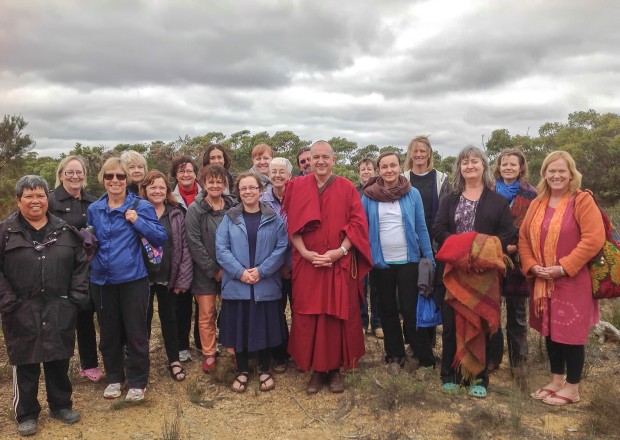 Australia’s De-Tong Ling Retreat Centre is located on Kangaroo Island, a 20-minute flight or a 40-minute ferry ride from Adelaide, a city of 1.2 million people and capital of South Australia. The island is unique in many ways, being one of the most recently settled places on the planet. It is estimated that even the aboriginal habitation of the island ceased between five to ten thousand years ago. Home to the second largest numbers of unique flora and fauna on planet earth, the island has benefited from the lack of invasive animals that have damaged much of the mainland’s natural habitat.

De-Tong Ling, nestled into the northwestern part of the “conservation heartland” of the island, was originally established for people to do solitary retreats. So far five retreat cabins have been built with plans for another seven. Group retreats have also been conducted on the island annually for the last 10 years. These group retreats have been held on the adjoining property owned by Kimball Cuddihy, who helped found and direct De-Tong Ling from 1988 until 2012. 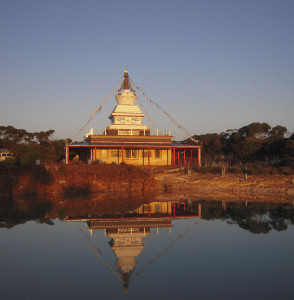 This year, the first group retreat was held at the center in the room underneath the newly completed Enlightenment Stupa. Including the gompa underneath, it is the largest completed stupa in Australia, standing some 14 meters [46 feet].

The room supporting the stupa was built, mud-brick by mud-brick, from the earth on the property. The interior walls are lime-washed in traditional style and colors, providing a smooth, warm backdrop for the more detailed interior decorations to come. Artists have already begun work on a contemporary floor-to-ceiling mural of the 12 deeds of the Buddha that will frame the doors and a jeweled lotus-garland frieze encircling the room. Meditators appreciated the secluded ambience and intense stillness of this temporary gompa, its glass-windowed, tiered ceiling belying the mighty presence of the stupa above.

Twenty people attended the Easter long-weekend calm abiding retreat which was led by Ven. Thubten Dondrub, resident teacher of Buddha House in Adelaide, whose generosity and wisdom were invaluable in guiding this practice. During breaks, circumambulations of the stupa were done on the upper balcony and on the ground floor where 30 small prayer wheels adorned with Chenrezig mantras are set in wall recesses around the building. Nearby is the foundation of the giant prayer-wheel house through which one will pass to reach the deck that overlooks the brilliant blue lake.

“Four days in this place is, in itself, a blessing to anyone’s mind,” commented one student. “Even in its fledgling state you can feel that all the buddhas are present at De-Tong Ling. There is a power and palpable energy that abides in this place. I came away with a deeper practice, a renewed commitment to the path and a belief that if I can create the causes, then samadhi will arise.”

“It is a combination of the remote location, environment and energy that creates a distinct, conducive experience for retreatants at De-Tong Ling,” commented another student. “I’ve been fortunate to attend the annual 10-day lam-rim mediation retreat and Easter long-weekend calm abiding retreat at De-Tong Ling and hope to return for both in the years to come. The remoteness of not only the island but the location of the center on the island provides an environment of zero modern interruptions and distractions. With only the natural sounds of birds and crickets to distract the mind, it has been the most conducive space I have yet to practice meditation. The exceptional energy and enthusiasm of all those involved in hosting the retreat is both warming and infectious, and I cannot recommend the center enough for those looking for an authentic retreat environment.”

Find more information on what De-Tong Ling offers to retreatants at www.detongling.org.