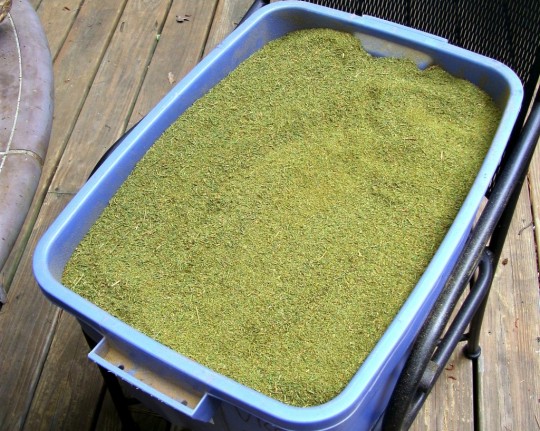 Last year, Kadampa Center completed its beautiful Kadampa Stupa. This year, Land of Medicine Buddha is in the process of building a new stupa modeled on the Mahabodhi Stupa in Bodhgaya. Mer Stafford, who with her family was active with Kadampa Center during their stupa building is now living in California and is involved with Land of Medicine Buddha’s project. She wrote Kadampa Center member Christopher Baranski asking him to share his technique for making juniper powder incense, which they used to fill the Kadampa Stupa. Sarah Brooks, spiritual program coordinator at Kadampa Center, got wind of the exchange and thought there might be more people who would want to know how to make their own incense powder and shared the instructions with Mandala.

When asked how he started making the incense, Christopher wrote Mandala, “We had a contest to get juniper/eastern red cedar incense for [filling] some statues and I won with the 2-1/2 gallons [I’d made]. It all took off from there. When I heard we needed six tubs, about 132 gallons for our beautiful stupa, I got busy.

“I feel this gives me a karmic connection with anyone who sees our stupa or uses a statue for a practice. Since a lot of the time I am waiting for the baking of the needles to finish or watching needles whirl in a blender, I am always thinking of more efficient ways to complete the task. I could not have done this without other center members who have helped find eastern red cedar trees, strip needles off branches, load pans, bake, grind needles into powder, and sift.”

You can see more photos of Christopher’s efforts on his Flickr page. 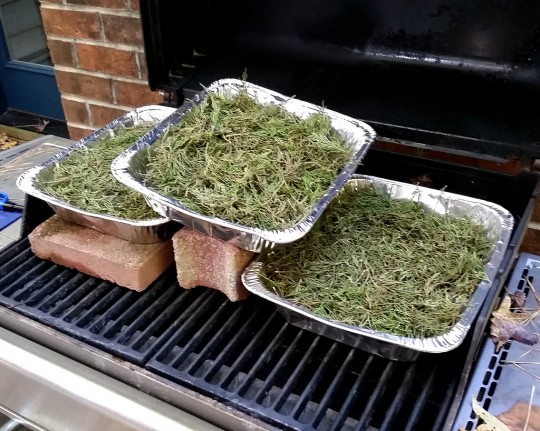 1) Find eastern red cedar (Juniperus virginiana), also known as juniper. You can’t ever collect enough needles. In this part of the country, juniper is grown as decoration, so it’s not free like the trees, which are spread by birds. Ninety-eight percent of what I have used has come from trees.

2) Strip off just the needles by hand. If some of the smallest branches are mixed in, this is OK. 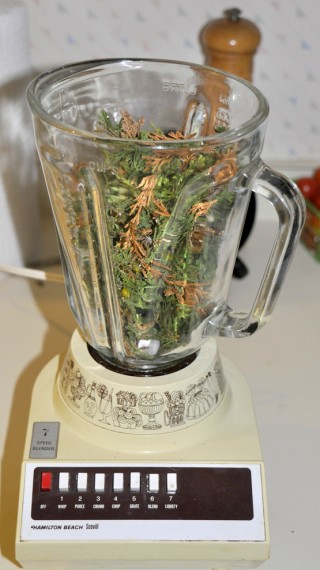 3) Place the needles in aluminum pans as shown in the photo above on a grill and bake for 1 hour. The temperature and length of time requires some experimentation. I have started placing these on brick tiles so I can turn the grill off after an hour while it continues to dry out. Also, with the pans on bricks, there is little chance the needles will burn. Try to keep temp below 400°F (204°C). My current process is 1 hour at about 300°F (149°C).

The baking can be done inside, but some people can be allergic to this, like my wife!

4) When the needles and twigs are crunchy-crispy, remove from grill, chop up a bit more by hand, and then place in a blender and grind up until it is all powder. I am currently using a 12 ounce plastic soda bottle with the bottom cut off as a safe pusher that won’t damage the blender.

5) I sift the powder with a wire mesh colander with holes a bit larger than a window screen. This removes the large twig pieces that can either be discarded or dumped back into the blenders to be ground up more.

If you follow self-cherishing thoughts, those thoughts become your identity. Then anger, pride, the jealous mind – all this negative emotional stuff arises. When you let go of the I and cherish others, negative emotional thoughts do not arise. That’s very clear. Anger does not arise at those you cherish.