The Dharma of Sitting 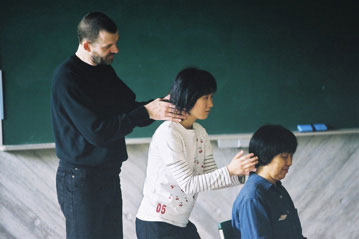 Jeremy Chance (left) is a qualified Alexander technique teacher,
and is treasurer of FPMT’s Do Ngak Sung Juk Centre in Japan.

“The things that don’t exist are the most difficult to get rid of.”

Sitting meditation is central to Buddhist practice, yet for someone just starting out on the path to enlightenment, especially us Westerners, one of the significant obstacles to a calm mind and a successful practice is the continual distraction of discomfort and pain. How we deal with that discomfort can be a source of Dharma practice, rather than an irritating distraction…

As a Buddhist I was struck when I first read those words for obvious reasons – the non-existent self is certainly the most difficult to get rid of! Doing so is the path to enlightenment, yet these words were spoken by a teacher who knew little of Buddhism and almost nothing of Tibetan Buddhism. The man was F. M. Alexander (1869–1955), and he was the founder of what is known today as “the Alexander technique.” No one has been able to come up with a better name for a method that is both congruent and supportive of Buddhist practice.

The first idea to get rid of is that we can find a good posture in sitting meditation. There is no such thing – it doesn’t exist! We know from the teachings that things exist in dependence on the moment before. So in Buddhism we can say: There is no sitter, just sitting. But if there is only sitting, when is the moment of good posture? Can we conceive of this being some position that we can find? Certainly, many of us try to do that. We wiggle and search for this illusive object – pulling in our backs, fixing our heads into what we conceive as a correct position, continually looking for this comfortable position both before and during our practice. But check it out – did you ever find this position? If you did, how long did it last? When I am spending my energy in this way, what am I doing? I have conceived, incorrectly, that such a thing exists, and then I have set about making all kinds of movements in an attempt to find this non-existent good posture. Can we say that this is good Dharma practice? Or are we actually nurturing our delusions in our attempt to be rid of them…?

Alexander’s work is built on the premise that the elegance, ease, and flexibility of human movement is our birthright. However, in the process of growing up, we develop habits that obscure the true nature of our movement. We pile one habit upon another, mostly as a result of mental afflictions manifesting as muscular activity, then we set about trying to correct ourselves, and when that doesn’t work, we start looking around for more things we can do to fix our posture. Alexander said: “You can’t do what you don’t know, if you keep on doing what you do know.” So there is nothing to “do,” only things to undo, things to get rid of. This concept of undoing is central in the study of this work…