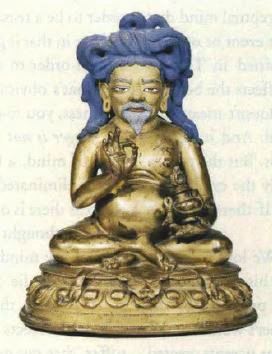 Tangtong Gyalpo was the greatest engineer in Tibetan history, one of its most prolific architects, and an innovative artist. His many iron bridges, monasteries, and stupas have enriched Tibetan culture for over five hundred years. The extent to which he changed his country’s spiritual topography through concrete activities based on mystical theory remains unparalleled in Tibetan history.

Tangtong Gyalpo built his first iron suspension bridge over the Kyichu River near Lhasa in Central Tibet in 1430. From that time he was famed throughout Tibet and the Himalayan regions as the “Iron- Bridge Man.” In addition to iron bridges, he built many stupa monuments to tame hostile influences, prevent natural disasters, protect against disease, and avert invasion by Mongol armies. These stupas were constructed in Tibet and the borderlands according to geomantic principles, and were situated at strategic locations to serve as environmental focal-points. A number of Tangtong’s monasteries and temples were placed according to the same theory.

Tangtong Gyalpo once had a vision of a large crowd of people crossing an expanse of water on iron bridges and ferries. He understood this to symbolize that he would be able to save all living beings from the four rivers of birth, old age, sickness, and death. Moreover, he would liberate them from the sufferings of the ocean of samsara by means of the ferries and bridges of skillful means and wisdom. He further emphasized this by referring to his bridges as “iron-bridge pathways to enlightenment.” By the end of his life, Tangtong had constructed fifty-eight iron bridges, sixty wooden bridges, and 118 ferries. …

Read to the complete article as a PDF.

Cherishing others opens the door to every happiness for self and others.