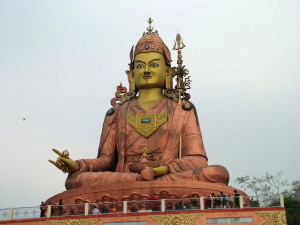 Lama Zopa Rinpoche and students at the large statue of Padmasambhava in Sikkim, India, 2006

In the Spring of 2006, after attending His Holiness the Dalai Lama’s Monlam teachings in Dharamsala, Lama Zopa Rinpoche made a short trip to Sikkim to view the recently completed gigantic statue of Padmasambhava, which at 135 feet is the largest [of Guru Rinpochel in the world. Sikkim is perched high in the eastern highlands of the Himalaya mountain range. It is small, but incredibly beautiful. Bhutan lies to its east, Nepal to its west, and Tibet to its north. Lillian Too, who flew to Delhi to join Rinpoche’s journey to the tiny Himalayan state, shares magical moments of the pilgrimage with Mandala readers …

Traveling with Lama Zopa Rinpoche is always an uncertain itinerary. One is never quite sure about timing and schedules, but this time everything unfolds perfectly. We arrange to meet in Delhi on the night of March 30. We – my friends M.K. and his wife Ming and I – fly in from Kuala Lumpur. Salim Li [former FPMT Board member] comes from Perth, while Ven. Roger Kunsang [Lama Zopa’s personal assistant and President and CEO of FPMT Inc.] gets in the night before from Portland, Oregon. Ven. Nyima Tashi [attendant to Charok Lama and a relative of Lama Zopa Rinpoche’s: his brother Ven. Tenzin Pemba is co-director of Cham-Tse-Ling center in Hong Kong] has come from Kathmandu, and Rinpoche himself is driving from Dharamsala with his attendant Ven. Jinpa and Charok Lama [the fourteen-year-old reincarnation of a great Nyingma yogi and terton, Kushig Mangden] – a twelve-hour drive that begins at dawn the same day. It is a very tiring drive. Charok Lama [presently studying at Sera Je Monastery] later confides to me how stressful the drive has been – hot, dusty and humid – but Rinpoche shows no sign of fatigue when we all meet for a late night supper. He is relaxed and seems very happy to see us.

…  We start early. It is not long before I am reminded that when one travels with Rinpoche, there are always unexpected, yummy teachings and transmissions. Rinpoche is incredibly skillful at weaving precious practices into conversations and observations as we travel together. This transforms even the most mundane moments of travel into precious time spent with the guru as we gain insights into enhancing our Dharma practice.

As we drive to Delhi airport, this time, for instance, Rinpoche buys two bunches of red roses from a street vendor when the car stops at a red-light road interchange. He holds on to the flowers until we reach the terminal, at which point he passes the flowers to me. I hold them until Rinpoche leans over and says to me, “You can give them to anyone you like.” …

We can transform any problem, even death, into happiness. The point is not to stop the experience of problems but to stop the conditions that we call ‘problems’ from disturbing our mind, and instead use them to support the spiritual path that we practice.