MAJOR FRED CHEONG was once told by Geshe Lama Konchog that in his previous life he was a soldier in Tibet who had died protecting the Dharma. This life he is a Buddhist again, a soldier again, and has served in the Singaporean army for 20 years. How conducive is the army to practice? He speaks to Jaffa Elias. 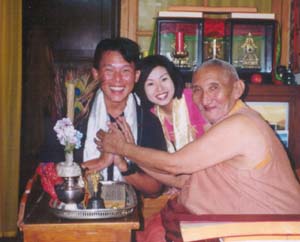 Why did I join the army? It was a career, I thought, that offered excitement and glory. I joined as a regular conscript — Singapore has compulsory conscription — and went onto officer cadet school. Four months later I joined the regular force. Now I’m a Brigade Operation Officer: soldiers report to me, I plan their training, how to feed and equip them, all the logistics, how, too, to maintain the gear ready for war. I am in a unit though which doesn’t go for “direct action.”

If I were a soldier now in Afghanistan, American or otherwise, I would be creating a lot of karma to be reborn in a future life with much suffering. I feel extremely lucky, not because I am a soldier in Singapore, but because I’ve met my gurus. What they have given me, I treasure even more now, and I’ve got this opportunity to practice.

Is there any good in violence? On television, CNN for example, you can see that people suffer right away when there is an air raid/bombing. I am quite sure there is more suffering to come for those in America and her allies in the war. Should I become involved in a war situation, Ven. Ribur Rinpoche told me to tell my commander not to fight! (Laughter). “Tell them to stop bombing,” he said, “and do something else.” I personally feel war can never bring long-term peace — it’s the beginning of something that must be wrapped up diplomatically…

…Sometimes I ask certain Buddhist colleagues, “Are you prepared to die today?” We can die at any moment and unprepared can go to lower realms. A soldier is always prepared to go somewhere at a moment’s notice — for me that is the moment of death. I want to be strong enough to face it and to carry on, in my next rebirth, to fight the next battle for others. I really feel this quite strongly.