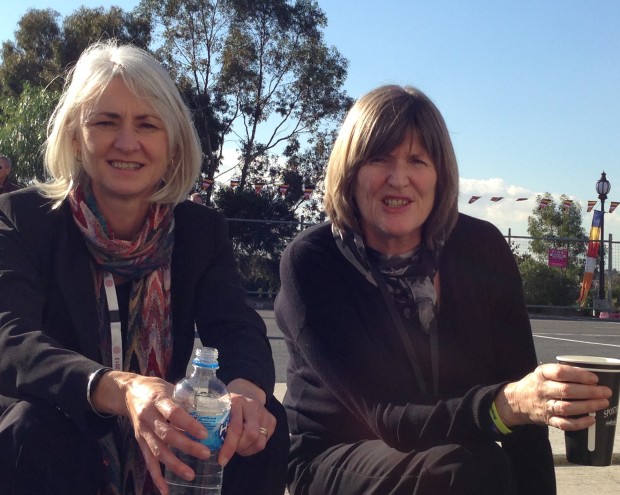 Karen Mayer (left) and another event volunteer taking a brief rest on the steps outside the teaching venue at the Vietnamese temple, Melbourne, Australia, June 2013. Photo by Cynthia Karena.

His Holiness the Dalai Lama had arrived. Standing near the stage, organizing committee member Karen Mayer overheard the conversation on the security person’s headpiece.

“A whisper started, ‘he’s arrived.’ I can remember feeling this burst of emotion traveling through my body, and I looked at the woman next to me who was crying. There was such an energy coming from everyone around me,” Karen said.

His Holiness was invited by Geshe Sonam Thargye from the Drol Kar Buddhist Centre in Geelong, an hour’s drive from Melbourne, to teach on the Heart Sutra and the Eight Verses of Mind Training.

Karen often drove for over an hour from her house near Geelong to get to Melbourne and beyond to attend seemingly endless meetings in preparation for His Holiness’ only Melbourne teaching for 2013.

“I am not a diligent Dharma practitioner as far as meditation and study, so another way to practice the teachings is to work and offer your time.”

Karen was part of a small group that had to be at the venue well before sunrise in order to be ready to welcome and register volunteers.

“The breaking of dawn across the silhouette of the large white Buddha statue in the garden was a memorable moment, as was sitting on top of the shrine room steps looking down at all the excited Tibetan audience thinking how special this must be for them to meet His Holiness.” 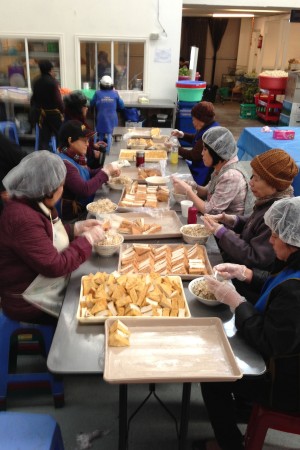 Vietnamese volunteers preparing food for Sangha, volunteers, and for sale to the general public. Photo by Cynthia Karena.

The Vietnamese volunteers at the temple worked tirelessly and with a minimum of fuss.

“The generosity of the Vietnamese community was a humbling experience. They worked very hard, fed us all delicious meals with smiles, and seemed to work around the clock to make the day successful. They opened their hearts and offered their space with warmth. It is an inspiring community.

“[I remember] the exhale at the end of the day, smiling faces, people happy and joyous, knowing everyone enjoyed the day and it was worth the effort,” Karen said.

“At the end of the day you can dedicate and rejoice that you benefited a few thousand sentient beings by being part of an event that that gave them contact with His Holiness’ wisdom and compassion. I don’t think I could say that about many of my other activities!”

What struck stage manager Elyjah McLeod is the Dalai Lama’s exceptional ability to draw together such a mix of people. “I love seeing the love in the eyes of the people when they see him. My mother was in attendance for the first time and also a young man that I have known since he was a dot on the ultrasound machine,” Elyjan said.

“It’s all like a dream state now and I’m waking up out of it. I feel fortunate and lucky to have been able to help in the smallest way that I did.”

The most memorable moment for Sangha care volunteer Carol Amos was when the Dalai Lama first stepped out of the car and looked over everyone standing there. “He connected with each and every one of us. He brought us all into his world, which I found incredible.”

Carol, despite no Vietnamese language skills, was laughing and working with the Vietnamese volunteers who tirelessly prepared food for Sangha and volunteers. “Seeing the dining room abuzz with Sangha of all different nationalities was memorable,” Carol said. 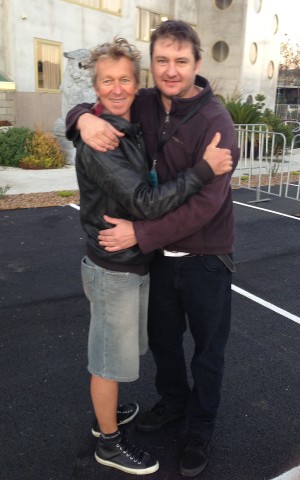 “But the biggest highlight for me is seeing how people are transformed after being in teachings with His Holiness. It’s incredible – the sense of community is very much alive and I feel extremely blessed to be able to be a part of this.”

Volunteering is an opportunity to apply the teachings, said volunteer and chair whisperer Brian McTaggart, who moved chairs and managed to transform the seating plan into reality.

“What I get out of volunteering is knowing I’m being the change I wish to see of the world. Every day I pledge to be of benefit to all beings,” Brian said.

“One day in service to His Holiness is a life well spent. It’s also great to work with like-minded others to bring about a great event. Making new friends and connecting with some I only see at such events. What a community. I wish there was an opportunity to do this sort of work more often.”

Cynthia Karena lives in Melbourne and contributes regularly to Mandala.