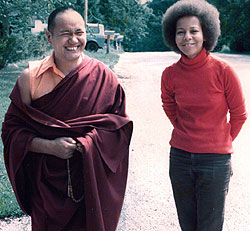 Three days before the U.S. presidential election, Professor Jan Willis, one of the early Western students of Lama Yeshe, gave a lecture on Women and Buddhism at Maitripa College in Portland, Oregon. When this renowned African American Buddhist talked to Mandala staffer Sandra Peterson, she remembered Lama Yeshe’s unique and loving style of encouragement, and his sensible approach to issues of race and gender.

SANDRA PETERSON: I know that you studied with Lama Yeshe. And there’s a saying that history is written by the victors. To me, those victors are the “privileged.” How would Lama Yeshe allow for the difference in the lens through which the ego is seen by a white male living in Manhattan, who has been to the best schools and by someone living in East L.A. [Los Angeles] without the same kind of advantage?

JAN WILLIS: Or someone from the South who had to drink at a water fountain marked “colored”? It’s also often said that history is his-story.

SP: Exactly. Or would Lama distill it all down into ego and attachment?

JW: Lama was a genuine guru who could tell what was best for a particular student. When he looked at me, he saw the battle I was having between pride and humility. I talk about this in my book, Dreaming Me1. “Yes,” he said “Pride and humility, they are so tough, so strong.” It was as though he saw right to the bottom of me: I had this low self-esteem and had endured all those put-downs from the racism of the South, but at the same time I wanted to be strong; I wanted to be strong and powerful. There he was one morning, toothbrush poised in his hand, knowing that that was the conflict I was facing. Having a low opinion of myself and yet wanting to have a proud opinion – but not the kind of proud opinion that rubs it in anybody else’s face, just one that lets you feel at home in your own skin. It was so amazing. He just bowled me over with just that simple statement – and then he went off to brush his teeth. I thought, Whoa! He really knows me well! He told me I was intelligent, he told me that tasks that I saw as impossible were easy.

SP: What tasks were they?

JW: When I was working on my dissertation, I said to him, “How in the world can I learn all these languages?” And he’d say, “Oh you can, that’s so easy. You can do this, this and this.” He actually made things seem easy. I’d talk with Lama Zopa (we were these young, thin, things together in those days), and we’d both say, “When was there the time for Lama to have read all these texts?” We would see him talking to everybody, taking care of everybody, being gentle with everybody, but when did he ever have time for himself? You’d ask him a question, and he would answer from some text. It was perfectly clear that he knew about it, had thought about it, and had done all these debates. He had an incredible, incredible intellect, but you couldn’t imagine when he could have possibly found time for all that study. Did he ever sleep?

Lama Yeshe helped me through graduate school when I was so frustrated. “Go back again, that professor has problems, but you’ll be alright,” he’d say. “The professor has problems. It’s not your problem. Go back and do it and everything will be alright.” And things were alright, and with some things there was probably a little magic involved, certainly his blessings. In other ways Lama Yeshe encouraged me by forcing me to do things.

He’d come by the house and say that in two hours he would have to give a lecture. He’d say, “You write it.” What? “Write that lecture. Come on, it’s easy, do it. I’ll be back in two hours.” Then you panic. Your knees buckle. But you find yourself writing it because he’s coming back in two hours. There’d be these concrete examples of accomplishing things you never thought you could do.

I often think about the ways that Marpa treated Milarepa, and with me it wasn’t through any kind of hardship, rather it was always with encouragement. You can do it. Lama had no doubt. It was a real sense of giving me empowerment. And he did that for fifteen years – I think it actually took that long in my case.

I once got a call from Sister Max – it was just before Lama’s last trip to California in 1983. “Hi Jan, Lama wants you to do a month-long philosophy course with him.” Me? “Yeah, you.” Gee, whiz. Then we talked a little bit about where it might happen and then I got up the courage to ask, Why me? “He knows you teach philosophy. He thinks you’re a good teacher so who would be better? This is what he wants. And, he wants to read the things in the original. Get it ready.”

One morning Lama Yeshe said, “Before we start, this man Plato is wrong.” You think so? He hadn’t read Aristotle yet, but he knew that Plato was wrong. Why? “Because he says, you see beauty. But you no see beauty. You see beautiful thing. Examples: this, this, that. Beauty doesn’t exist. This man is wrong!” Of course this is exactly what Aristotle will argue: that you don’t see the universal, you only see the particulars. But as soon as Lama Yeshe read Plato, boom! He saw the mistake. And I’d think: where does it come from? Is that how sharp the mind becomes because it’s been training in the Tibetan system?

When I talk of being detached, what I mean is to be simpler, more easy-going. Detachment doesn’t mean totally renouncing everything. It means that you loosen your grip and be more relaxed.