Abbot Philip Lawrence, OSB, placed the letters he received from his monastic association’s East/West Dialogue group “carefully in the garbage can” – he wanted his monastery, Christ in the Desert, to ”focus on the inner reality of Catholic Christian monasticism.” In 2002, however, two Bön monks from Menri Monastery India, arrived on his doorstep. They had been unhappily placed elsewhere. A relationship began and now the two monasteries consider themselves ”twin monasteries.” Jaffa Elias explores this connection with Abbot Philip Lawrence and Chongtul Rinpoche, a Menri-educated tulku. 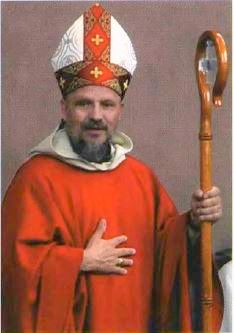 ABBOT PHILIP LAWRENCE, OSB
Abbot Philip Lawrence, fifty-eight and jovial with it, gives an energetic tour of his monastery, which is picturesquely set in a circular valley amidst towering cliffs. He points to a wall in his cell. It is blue and adorned with a thangka, photos, and various memorabilia – “this is my Bön wall,” he laughs.

Before his family became Catholic, Philip Lawrence, aged 10, had “never heard of religious life.” Three years later, however, he took an exam to enter the seminary at Mount Angel Abbey, Oregon. “It was the first time I’d ever seen a monastery, the first time I’d ever heard of a monk, and the minute I saw it, it was what I wanted to do.” He joined the seminary at 14. Aged 20 he became a monk and took temporary and final vows, and was ordained a deacon. Aged 30 his spiritual director sent him to Christ in the Desert, New Mexico. He was made the superior of the community, with the title of Prior in 1976. There are now 31 monks.

“Our rule, to live peacefully together and seek God, goes back to Saint Benedict (480 – 550 AD),” Abbot Philip explains. “The great spiritual teaching in the Rule of Benedict is the chapter on humility – the focus of the whole rule – and then the vows of obedience, of conversion of life and stability within the community.” Benedictines, Cistercians (reformed Benedictines), and Trappists (reformed Cistercians) all follow the rules of St. Benedict – the Trappists are generally contemplative, and the Benedictines in this country are primarily active. Christ in the Desert, however, focuses on the inner life. The day starts with prayers at 4:00 a.m. and throughout the day the monks break for prayers, going to the Church seven times in a day and having other times for private prayer and reading. ”It’s not a day when you say, ‘I wonder what I’ll do today?’ Our type of life is relentless, and it’s meant to be relentless,” Abbot Philip says. “Here we work in order that we can pray.” … 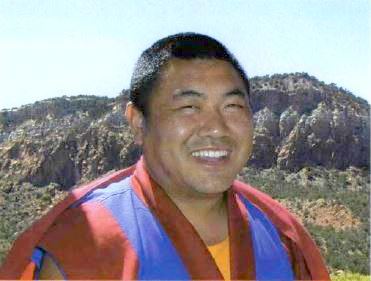 Chongtul Rinpoche at Christ in the Desert

CHONGTUL RINPOCHE
Chongtul Rinpoche takes a break from an intense international teaching tour, to spend a couple of days at Christ in the Desert. He is young (35), affable, and relates directly.

Rinpoche was born in Himachel Pradesh, northern India, in 1967, and joined Menri Monastery, in the Bön settlement of Dolanji, aged eleven, taking monks’ vows at thirteen. He graduated as a geshe in 1990 after a nine-year course at the Bön Dialectic School. He has served Menri in many capacities, first as ritual performer in the protector chapel (he was eleven); then as chant leader (he was fourteen). He now takes care of  the monastery under abbot Menri Trizin Rinpoche’s direction, teaches in the Bön Dialectic School and directs the Bön Children’s Welfare Center, which cares for 400 orphans and children from poor families.

“I really like being a monk. It is a very nice life,” Chongtul Rinpoche laughs. At fifteen he was recognized as the reincarnation of the head lama of Kyong Tsang Monastery, Eastern Tibet. He was able to visit there in 1997. Scanning the monastery’s books he picked one out that seemed familiar and was told that it was his previous incarnation’s daily prayer book. You strove to finish that book every day despite sometimes arriving home after midnight, he was told by the monks there.

So is Bön Buddhist? Yes, but not Indian Buddhist, Chongtul explains. “We follow the Three Jewels, but we take Buddha Tonpa Shenrab Miwoche (who lived 18,000 years ago) instead of
Buddha Shakyamuni as our root teacher. We take refuge in the Bön canon (Dharmaa) and the Bön lineage masters (Sangha).” At the heart of Bön, the oldest religious tradition in Tibet, lie the practices of refuge and bodhichitta. Some say that the Bön took these ideas from Buddhism, Chongtul says, but they are to be found in the Bön canon, which is in the Zhang Zhung language, the ancient language of Bönism. …

The whole thing, so many practices, all come down to live the daily life with bodhicitta motivation to put all the effort in that whatever you do. This way your life doesn’t get wasted and it becomes full of joy and happiness, with no regrets later, especially when you die and you can die with a smile outside and a smile in the heart.